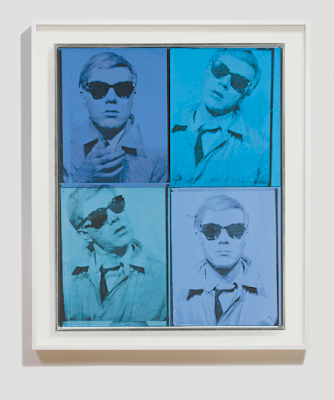 Andy Warhol's "Self-Portrait" is pictured in this undated handout photo. The Andy Warhol self-portrait purchased in 1963 for $1,600 on an installment plan is poised to fetch $30 million or more when it hits the auction block at Christie's in May. The four-panel acrylic silkscreen depicting the pop artist wearing a trench coat and sunglasses, is being sold by the family of Detroit collector Florence Barron. REUTERS/Christie's Images Ltd.

NEW YORK, N.Y (REUTERS).- An Andy Warhol self-portrait purchased in 1963 for $1,600 on an installment plan is poised to fetch $30 million or more when it hits the auction block at Christie's in May.

"Self-Portrait," a four-panel acrylic silkscreen depicting the pop artist wearing a trench coat and sunglasses, is being sold by the family of Detroit collector Florence Barron.

Barron first commissioned Warhol to paint her portrait, but changed her mind and suggested the young artist depict himself, telling him, "Nobody knows me ... They want to see you."

The result was Warhol's first self portrait, four images taken in a coin-operated photo booth rendered in hues of blue.

"My mother didn't look at collecting in terms of 'is this important or not important,'" Guy Barron told Reuters.

"She looked at it from the standpoint of what resonated with her, and of 'I want to live with it.' It was not done as some people do today, as wall power."

The portrait graced the living room wall of the family home in Detroit. It also went on public display, serving as the cover image for catalogs from major Warhol exhibitions and retrospectives at the Museum of Modern Art in New York and the Guggenheim in Bilbao, Spain.

Brett Gorvy, Christie's international co-head and deputy chairman for post-war and contemporary art, said the work marked the beginning of Warhol's own stardom.

"With dark sunglasses an oblivious gaze, Warhol was ahead of his time in creating a new archetype of glamour," Gorvy said.

"The painting is remarkable not only for its visual impact and the introduction of the photo booth genre, but for marking a key moment in the history of art, when Warhol takes his place in the pantheon of celebrity alongside Marilyn, Elizabeth and Elvis."

Barron, whose family includes two married sons and several grandchildren, said they were auctioning the work because "dividing is not possible, so selling makes the most sense."

"I feel that Andy Warhol himself would appreciate this, because he always talked about everyone in their lifetime having their turn in the spotlight for 15 minutes. Who'd have thought that his self-portrait would play such a role in our lives?"

The record for a Warhol self-portrait is $32.6 million set last May at Sotheby's in New York. The record price for any Warhol sold at auction is "Green Car Crash (Green Burning Car I)," which Christie's sold for a whopping $71.7 million in 2007.

NEW YORK, NY.- The market for important works by Andy Warhol, the reigning king of Pop, continued to reach new heights at Christie's New York tonight, as bidders chased two iconic self-portraits by the artist, setting a new world auction record for a Warhol portrait in the process.

The photo-booth style Self-Portrait, 1963-64 sold for $38,442,500 (£23,449,925/€26,909,750) after an epic 16 minute bidding battle between clients in the room and on the phone. After volleying bids back and forth for what was the longest Evening Sale bidding war in recent memory, Christie’s Brett Gorvy, International Co-Head of Post-War & Contemporary Art, scored the winning bid on behalf of a client on the phone, and the audience erupted in applause. The price with premium surpasses the previous record of $32.5 million set for a Warhol self-portrait last year.

Painted in 1963-1964, Self-Portrait marks the first historic crafting of the artist’s iconic image in a photo booth, a radical concept of picture-making that revolutionized art history. A four-panel masterpiece executed in four distinct variations of blue features shows Warhol for the first time in the guise of the enigmatic superstar, replete with silver hair, wayfarer sunglasses and a blank expression. 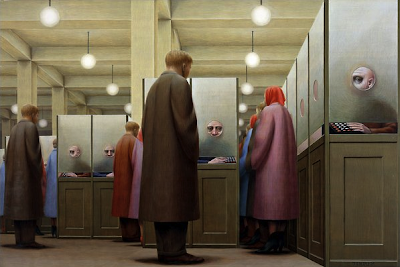 New York, NY - One of the most acclaimed painters of his generation, George Tooker (1920-2011) possessed an originality and depth of vision that is unsurpassed in modern American art. For over sixty years, he has been highly regarded for his luminous and often enigmatic work. His themes range from alienation and the dehumanizing aspects of contemporary society to personal meditations on the human condition. Tooker began his career at a time when the prevailing aesthetic was "modernism" and the darlings of the art world were American minimalists. Tooker, however, was clear from the beginning that he had no interest in minimalist art, very much to the contrary, he was instead bent on creating "maximalist" art. He has said that "in one kind of painting I'm trying to say 'this is what we are forced to suffer in life,' while in other paintings I say 'this is what we should be.'" Tooker first came to prominence for imaginative visions that expressed the uncertainty of the Cold War era. Among his best-known paintings is "Subway" (1950, Whitney Museum of American Art), a powerful work that explores the anxiety and isolation of nameless individuals in urban society.

He was very involved with the Civil Rights Movement as well, in one instance marching in Selma, Alabama, with Dr. Martin Luther King in 1965, and frequently addressed issues of race and oppression in his work. In addition to his engagement with social commentary, Tooker also created strikingly beautiful paintings of a more personal nature, many of which are concerned with states of consciousness, mysterious meditative realms between sleep and wakefulness. His good friend Lincoln Kirstein once characterized his work as Magic Realism, which has since been frequently used to describe his paintings. Tooker never cared much for that designation, however, because of the connotations of fantasy and Surrealism. “I am after painting reality impressed on the mind so hard that it returns as a dream, but I am not after painting dreams as such, or fantasy,” he once said. Tooker died at his home in Hartland, Vermont, on Sunday, March 27 at the age of ninety. The cause was kidney failure according to DC Moore Gallery, New York, which represents the artist.

George Claire Tooker, Jr. was born August 5, 1920, in Brooklyn New York. He was the first child of a Cuban-American mother and a father who was a municipal bond broker. Tooker's only sibling, Mary, was born later. Shortly after his birth the Tooker family moved to the more rural Bellport in south-central Long Island, some fifty miles east of New York City. The trajectory of his life began to manifest itself from the age of seven, when he began taking painting lessons from Malcolm Fraser, a family friend whose oeuvre was in the Barbizon tradition. Tooker began high school in Bellport. However, his parents weren't much impressed with the quality of the school, and he spent his last two years at the more rigorously academic Phillips Academy, in Andover, Massachusetts, north of Boston. George developed an intense dislike of the straight-laced school, with its orientation toward business and finance, and its concern that its students learn to hide their emotions. He gravited instead toward the school's art studio, where he worked at landscape drawing and watercolors. By virtue of its location, Andover did furnish some additional, if unintended education - Tooker became aware of effects of the Depression on the mill towns north of Andover. He was angered by the sharp contrast between the comfortable lifestyle of the children of the economic elite who attended the academy, and the many unemployed.

After graduation from Phillips in 1938, Tooker went on to Harvard, where he majored in English literature, that having been the only academic subject of interest to him at Phillips. Yet he spent much of his time at the Fogg Art Museum, and in the towns surrounding Boston, where he made watercolor sketches of the urban and rural landscapes. The Fogg's holdings include early Italian Renaissance, pre-Raphaelite and 19th-century French art. He also took up with some radical political organizations, but soon found them doctrinaire and boring. Nevertheless, it was during this time that he first became interested in the potential of art as a tool for social justice. Especially inspirational was the work of Mexican painters, especially David Alfaro Siqueiros and Jose Clemente Orozco. Graduating from Harvard in 1942, he immediately enlisted in the Marine Corps Officer's Candidate School, but an old stomach ailment turned serious, and he was discharged after a few months there. Now at loose ends, Tooker decided to pursue his long-standing desire to study art. Securing his parent's support, he enrolled in the Art Students League in New York. Here he studied for two years with Reginald Marsh who worked in egg tempera, Kenneth Hayes Miller who also taught Edward Hopper, and Harry Sternberg.

In 1944 Tooker met the painter Paul Cadmus. Cadmus was another painter who worked with egg tempera (using traditional Reanissance techniques), and transmitted this expertise to Tooker, whose use of this medium marks his mature style. A year later, with the financial support of his family, George moved to a flat on the bohemian Bleecker Street in Greewich Village, New York. In 1949 Cadmus and Tooker spent six months travelling in Italy and France; and in the same year George met painter William Christopher, who was to become his life partner until Christopher's death in 1973. In 1950 Tooker and Christopher moved into an illegal loft located at W. 18th St. Here, in order to support themselves, they made custom furniture. However, Tooker was beginning to earn both recognition and income from his art, the Whitney Museum bought his best-known painting, "The Subway", that year, he had a one-man exhibition in New York City in 1951, in 1954 he received a commission to design sets for an opera and in 1955 he held his second one-man show. With greater means as their disposal, the two first bought and renovated a brownstone on State Street in Brooklyn Heights and then, in the late 1950s, he and Christopher built a weekend home near Hartland, Vermont. The one-man shows in New York galleries picked up speed, Tooker having his own exhibitions in 1960, 1962, 1964 and 1967. Christopher died in Spain in 1973, and Tooker spent most of 1974 there, wrapping up disposition of his estate. Also in '73, a major survey exhibition of Tooker's work was organized by the Fine Arts Museums of San Francisco. That exhibition traveled to Chicago, New York, and Indianapolis. In 1976 Tooker became a Roman Catholic, and attended St. Francis of Assisi Church. After it burned down, he created a major painting for it, The Seven Sacraments. Until his death, Tooker lived and worked in in Harland, Vermont.

George Tooker is represented in museum collections across the country, including those of the Metropolitan Museum of Art, Museum of Modern Art, Whitney Museum of American Art, Brooklyn Museum, Hirshhorn Museum and Sculpture Garden, and National Museum of American Art. He has had numerous museum exhibitions over the years, such as a retrospective, George Tooker: Paintings, 1947-1973, organized by the Fine Arts Museum of San Francisco, California, in 1974; George Tooker: Paintings and Working Drawings at the Marsh Gallery, University of Richmond, Virginia, in 1989; 50 Years of Painting and Study Drawings at the Addison Gallery of American Art in Andover, Massachusetts, in 1994; and George Tooker: A Retrospective at the National Academy Museum, New York, Pennsylvania Academy of the Fine Arts, Philadelphia, and Columbus Museum of Art, Ohio, in 2008-09. His most recent exhibition was George Tooker: Studies for Paintings at DC Moore Gallery, New York, in 2009. He received the prestigious National Medal of Arts in 2007.

Tooker is survived by a sister, Mary Tooker Graham; her children, Peter and Russell Hume, and Angus and Angela Graham; and family members, Aaron Watkins and Sheila Adams, and Robert and Robin Watkins.